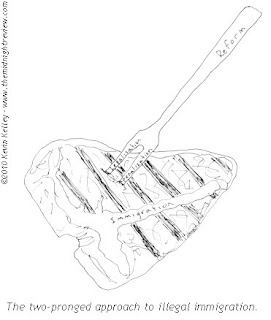 I was talking about the matter of immigration reform with some of my friends today when I thought of a radical way to curb immigration.

As it stands, we can build as many border fences or enact stricter laws aimed to deter illegal immigrants, but because of the potential for prosperity and the willingness for businesses to employ illegal immigrants, I don't foresee a decrease in the number of people crossing the border anytime soon.

The simple immigration reform that I had come up with with my friends consisted of two points - the legalization of marijuana and the penalization of businesses that hire illegal immigrants.

Legalizing marijuana would decrease the profitability of the drug for smugglers, helping decrease violence as well as immigration.

Penalizing companies that hire illegal immigrants at levels higher then they currently are would do more to reduce demand for cheap labor, because the fines would be greater then the savings of hiring an immigrant.

Is this idea practical?  I don't know, but I think it is worth looking into...
Posted by Kevin at 7:12 PM