The Unethical Use Of Statistics 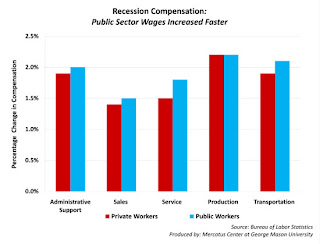 Here is the problem with unethical usage of statistics:

The problem is that when dealing with such small numbers, figures can be made to appear greater then what they really are. This is like investing in penny stocks - the price of the stock is sometimes worth tenths of a penny but as soon as the slightest increase takes place, the investor would experience large gains, but the increase in those particular stocks are not representative of the entire market. The research de Rugy cites essentially does the same, making the minute difference in pay seem greater then what it really is.

Check out this misuse of statistics coming from John Smithson, who cites the most recent Rasmussen report on the presidential approval without linking to the source - Smithson compares those who "strongly approve" to the "total disapprove" column, making the disparity appear greater then what it really is.  Keep in mind that there is a margin of error of +/- 3 percentage points as well.

I would also like to point out that Rasmussen has engaged in unethical polling in the past, making the results of any of their other surveys very questionable to say the least.  Eric Boehlert of Media Matters had written about the pollster in the past, pointing out one particular poll in which Rasmussen asked only Republicans of their opinion of Sarah Palin but passed off their results as representative of all political ideologies.

"What kind of polling firm, while trying to take the country's temperature about politics, only questions Republicans?"  Boehlert asked.

Apparently misusing statistics is alive and well among conservative activists like Smithson and de Rugy...
Posted by Kevin at 9:02 PM