The Fed New Of Housing Bubble, Florida's Housing Market Being In Dire Straits

Ryan Grim wrote an interesting article on The Huffington Post regarding the Federal Reserve and their knowledge of the housing bubble and their concerns at the time.


"We run the risk, by laying out the pros and cons of a particular argument, of inducing people to join in on the debate, and in this regard it is possible to lose control of a process that only we fully understand," Greenspan said, according to the transcripts of a March 2004 meeting.

At the same meeting, a Federal Reserve bank president from Atlanta, Jack Guynn, warned that "a number of folks are expressing growing concern about potential overbuilding and worrisome speculation in the real estate markets, especially in Florida. Entire condo projects and upscale residential lots are being pre-sold before any construction, with buyers freely admitting that they have no intention of occupying the units or building on the land but rather are counting on 'flipping' the properties--selling them quickly at higher prices."

Had Guynn's warning been heeded and the housing market cooled, the financial collapse of 2008 could have been avoided. But his comment was kept secret until Friday, when the central bank released the transcripts of Federal Open Market Committee meetings for 2004 and CalculatedRisk spotted it. The transcripts for 2005 to the present are still secret.

"The substantial run-up in house prices, which we have followed in Florida and also see in the populous Northeast and West Coast of the United States, may be at least partially attributable to unusually low mortgage rates influenced by our very accommodative policy," Guynn warned.

This revelation is very interesting.  While I understand the concern Greenspan had, it appears that Greenspan did not understand fully what was going on, and so the Federal Reserve adopted a wait-and-see policy, which as we all know now, was detrimental.  Florida still has not recovered from the bubble bursting, with the landscape being littered by incomplete projects like the Blue Rose condominium complex that was supposed to begin construction in 2007 or the fabled Village of Imagine, a sprawling community dreamed up by Intrawest, a company known for building ski resorts (what are they doing in Florida?), that had recently been forced into bankruptcy.  All that exists is the Westin Imagine hotel and a bunch of nothing. 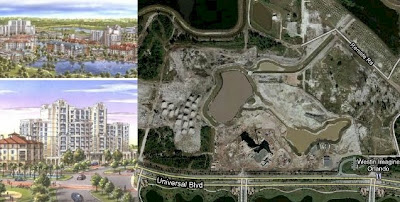 It's easy to say what we should have done, but every time Greenspan opens up his mouth, it seems that the man once seen as the master of economics, who served for almost 20 years and through four presidencies, was really playing it by ear.  Obviously I am understating his role and oversimplifying the matter, but to me, it appears that Greenspan allowed his political ideology of less (regulation) is more, which eventually proved to be disastrous.  Sure he was present during the tech bubble, but the bubble would have probably occurred anyway.  He was there riding the market's coattails and when things turned south, Greenspan let go.

Maybe Greenspan should have never given up playing music.  He probably would have contributed more to society then he already has.

I would also like to add this little side note regarding homeowners associations.  HOA's are a common topic on this site because of my extreme distaste for the corporations that exist solely to strip property rights away from their rightful owners.  A common talking point for HOA proponents is preserving property values and protecting one's investment.  During the housing boom, HOA's siezed the opportunity to solidify their power by enticing homeowners to willfully give up more rights for the promise of more money.  This is evident in the attempts made by such neighborhoods like Sand Lake Hills, Bay Lakes, or many of the other neighborhoods represented by the law firm of Larsen & Associates.

Now that the housing boom has burst, and property values in Florida have plummeted from their all-time highs, HOAs are scrambling to preserve their gains.  This time, HOA proponents are using the collapse of the housing market to scare homeowners into surrendering even more rights, promising to protect property values from further depreciation.  The only problem with their logic is that the property rights they stole a few years back were supposed to protect prices from dropping.  Unfortunately, that was not the case.  Homeowners lost big, and parcels located in HOAs saw equal, if not greater, losses to non-HOA parcels.

I just figured I would point that out...
Posted by Kevin at 1:21 AM