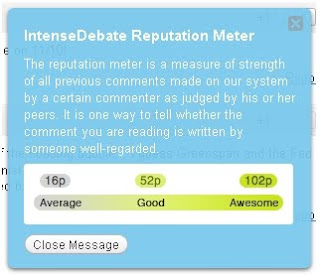 Now, for fun, I thought I would share the comments of "awesome" people, to give you an idea of what exactly the far right has to offer!

How about this one that references President Reagan's "Contract with America," promoting a conservative Political Action Committee called The Freshman 50: 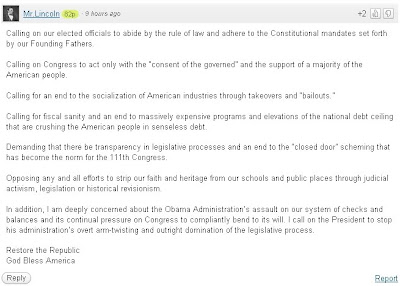 Although the above comment was between "good" and "awesome," I found it to be interesting nonetheless.  The commenter calls for "Congress to act only with the 'consent of the governed' and the support of a majority of the American people.  You commonly hear conservatives attacking liberals for promoting democratic principles when we live in a representative republic, yet unhappy with the fact that the elected officials who represented the majority voted for legislation the minority disapproves in, the right now believes in populism.  I also found the reference to "'closed door' scheming" interesting, being that Republicans wanted to stifle debate on financial reform by continuing "closed door" negotiations instead of bringing the bill to the Senate floor.  There is also the claim that Obama is trying to erode "checks and balances," yet looking backwards, Vice President Dick Cheney infused his position into the legislative branch, even though his position was one limited to the executive branch.

Despite all these contradictions, Mr. Lincoln is close to being "awesome" in the eyes of the Big Government audience.

How about this one claiming Obama is going to boost the capital gains tax in an effort to engage in "class warfare":

I may not be a professional economist, but I can see the contradictions in this post a mile away.  First off, the right-wing has been complaining that the American economy has been suffering, growing weaker in comparison to European markets, but this "awesome" comment believes the financial collapse of Greece will cause the world to collapse, wiping out your 401k.  I wasn't aware that the 28th world economy was capable of so much.  What makes this argument even more ridiculous is when you consider economies of scale.  Missy8s fears Greece will take down the world, when comparatively, GM would have been America's Greece, and it seems America did a good job at preventing total economic collapse with the automotive bailouts

I'll give you a hint - it wasn't bloated socialist budgets that caused GM to fail either, so Missy8s essentially believes that GM should have just cut spending by a few billion and weathered the storm, which they were in no position to do.  Allowing GM to collapse would have increased unemployment overnight by 10%, and I don't think that would have gone over well with the rest of America - just consider the articles from the right blasting America's current unemployment rate, which is hovering just above 10%.  I think that idea of letting GM fail was discussed, but in the end, it was deemed "to big to fail," like the banks.

How about this one that has about Andrew Breitbart waging war on media (I threw in a bonus response to the comment as well): 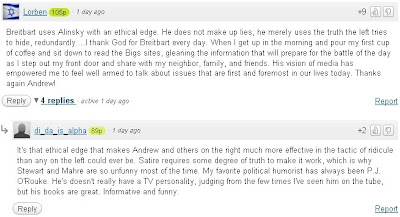 I laugh at the thought that Breitbart is ethical, when every time he appears on television, it is to make a baseless claim or try and twist other people's words around.  His war on media is more like a toddler throwing a tantrum.  Lorben praises Breitbart's use of Saul Alinsky's rules, but by using such tactics, the right falls into Alinsky's prediction, as mentioned on Wikipedia:


He believed that what President Richard Nixon and Vice-President Spiro Agnew called "The Silent Majority" was living in frustration and despair, worried about their future, and ripe for a turn to radical social change, to become politically-active citizens. He feared the middle class could be driven to a right-wing viewpoint, "making them ripe for the plucking by some guy on horseback promising a return to the vanished verities of yesterday." His stated motive: "I love this goddamn country, and we're going to take it back."

This is exactly what is playing out.  What is even worse is this reader admittingly gets all their news from Andrew Breitbart's various websites.

My score is on IntenseDebate is really low.  I think it is -65.  Apparently, the folks at Big Government didn't like it when I denied that the housing bubble was the cause of the Community Reinvestment Act, and organizations like National People's Action (NPA) and the National Training and Information Center, two organizations the author, Andrew Marcus, links to ACORN and SEIU.  I questioned as to whether or not Alan Greenspan, the Republican economist that has been pulling the Fed's strings for four presidencies, and who admitted that Fed wasn't quite sure what was going on (despite warnings from the president of the Federal Reserve Bank of Atlanta), was somewhat responsible for the crash and asked if liberals were responsible for the tech crash as well?

The responses claimed that Obama favored his union buddies with the GM deal, and that government should not interfere with the markets, ignoring their man Greenspan, unless they included him in the hands-off argument, in which Greenspan must be a RINO, but that makes no sense, since he favored less regulation and the markets failed...

Their comments are just one contradiction after another, and really seem to be based in propaganda, not fact.  I doubt a single commenter on that website would be able offer a real explanation as to why their way is the right way.  The funny thing is, I am not taking liberal stances.  I am simply asking questions regarding conservative accountability and defending policies that have not caused systemic failure, which the right-wing warned about prior to their passage...

Update May 6th, 2010 - I also just realized that each time you leave a comment, you automatically get a +1, because obviously the author would like their comment.  Theoretically, if enough comments are made uncontested, a commenter could become "awesmoe" by just writing enough comments...
Posted by Kevin at 12:05 AM