This article is a double header, beginning with Big Government's take on the "innocence" of James O'Keefe and then closing with a bit about a Florida state prosecutor fired for speaking at Tea Party events.

Conservative activist James O'Keefe had plead guilty to charges that they entered a government office under false pretenses but his employer, Andrew Breitbart and his site Big Government, are already putting a spin on this activists case, celebrating the fact that he did not commit a felony, only a misdemeanor.  Patrick Frey posted an article vindicating the guilty O'Keefe by citing a document showing that the government admitted that O'Keefe did not tamper with Senator Landrieu's telecommunications systems.

I didn't realize that committing a crime was worthy of hero worship, but apparently the folks at Big Government are short of reputable idols.  Some of the responses to Frey's article are appalling, with commenters advocating the violation of the law if it is for a greater good - a greater good that is self-defined, of course.  The lone critic to Frey's article was faced with some of that famed Big Government flaming I reported on: 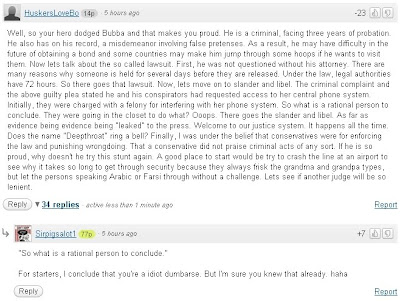 Gotta love those intellectual debates over at the propaganda headquarters.  Scrolling down the comments section, I found some more idiotic complaints from the teabag right, like this one I felt worth mentioning because it involved Florida politics and the tea party: 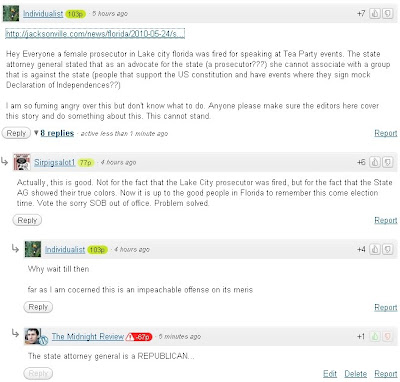 The particular instance Individualist is referring to the firing of Prosecutor KrisAnne Hall by State Attorney Skip Jarvis over voicing opinions at Tea Party events while assistant counsel for the state.

“You can’t take a job advocating for the state and go out and take a position against the state,” Jarvis said. “I advised her from my first learning of her activity that she was free to say and do whatever she desired within the law, but she could not do so while assistant counsel for the state.”

Individualist immediately tried to politicize this firing, but as Jarvis points out, and as this reader agrees, the firing was that of an employer firing an employee over a conflict of interest.  How can citizens be confident they would be represented by Hall equally if she takes positions held by a fringe conservative group?  While Hall's speeches are heavy on referencing the founding fathers and the Constitution, there is some troublesome citations, like her use of Sun Tzu to defend the Tea Parties, simultaneously attacking those who oppose the group, i.e. the Democrats.


Sun Tzu says in his Art of War, “Know thine enemy as thyself.” We must always remember that our enemies are not people or parties, but the freedom-destroying principles that they espouse.  We must inform ourselves on the principles of progressivism, socialism, communism; and the mechanisms these philosophies use such as redistribution of wealth, centralization of power, progressive taxation, and restrictions on free speech.    Once we are informed on these principles we will then recognize them.  And we must oppose them regardless of the party or personality attempting to employ them.

Notice the hot words Hall uses in her speech?  She uses pretty much every right-wing talking point in the book - talking points used to describe Democrats.  No wonder she got fired!  She is out there referring to citizens of the State of Florida as the enemy.  Conservatives seemingly ignore these details, seeing choice phrases about the Constitution as proof that Hall was wrongfully fired.

What made Individualist's comment stand out was not really what he/she said, but what Sirpigsalot1 said regarding the Attorney General of Florida, believing that this firing was politically motivated, so therefore the Attorney General must be a Democrat, but as it so happens, the AG, Bill McCollum, is a card-carrying Republican.  In fact, he was the same state AG that filed a lawsuit against the federal government over health care.

What gets me is that the comment left by this person is similar to the schlock that passes as news on the site itself, not just the un-moderated comments prone to flaming.  It is is very disheartening...

Update - May 29th, 2010, 6:58 am - It looks like some more of that conservative brand of flaming.  I got two comments attacking myself, as well as this site. 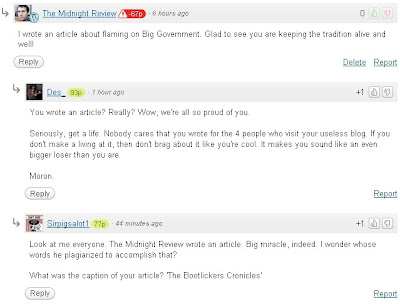 On the plus side, it looks like Big government is making good on their word - the comment by Sirpigsalot1 against Huskerslovebo was "deleted by the administrator," and in only five hours, too!

Unfortunately they still don't moderate the comments.  It seems they permit it until someone complains...

Also, check out the comment by Sirpigsalot1, pondering "whose words [I] plagiarized" to write this blog - sounds like a comment John Smithson would make.  I guess the initial response from these Big Government sheep is to try to discredit their critic with insults and baseless comments...

As long as they continue to allow their users to act in this imature way, The Midnight Review will keep the fire to Big Government's feet, reporting every comment that violates their terms of use.
Posted by Kevin at 1:00 AM