There is this great application on USA Today's website, allowing readers to input a dollar amount and year with the website displaying their effective tax rate, as well as how their taxes are divided. 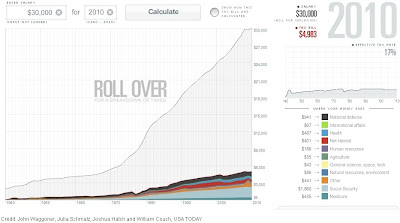 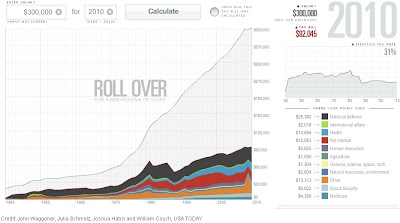 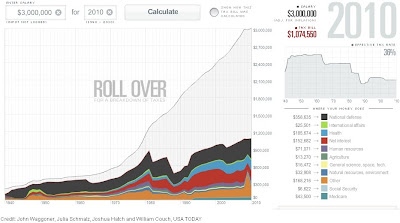 This is how the figures were obtained:


This tax calculator will give you a rough idea of your federal tax bill — and where your tax money went — from 1940 through 2010. Caveats: The calculator is for a taxpayer who files individually, uses the standard deduction instead of itemizing, and has one exemption. The calculator also figures your Social Security and Medicare taxes.

We've adjusted all figures for inflation, using the consumer price index. Results may be skewed for the very wealthy and the very poor. Upper-income filers are more likely to have income subject to alternative minimum tax, but they are also more likely to have income from capital gains and dividends, which are taxed at lower rates than ordinary income. Lower-income filers can take advantage of the earned income tax credit, which can reduce the tax bill of a single filer.

Regarding how the federal government spends those tax dollars, we broke out each tax bill into the amount that would be allocated among the government's broad spending categories. As a note, the "other" category refers to spending on veterans benefits and services, commerce and housing credits, transportation, community and regional development, general government, administration of justice and allowances.

Giving a face to the Tea Party's ugly rhetoric is enlightening.  Just consider the tax burdens before 1980!

I had recently posted on Big Government, pointing to the recent USA Today article.  I was attacked as being a lefty communist, but interestingly enough, a commenter stated they would have loved to have the tax burden of the 1950s, and they got a "thumbs up" from their fellow commenters...