Yesterday at work, some of my coworkers were discussing a headline that Obama's top political contributor a couple years ago was BP, the same company now in the news for being responsible for the recent rig explosion and the massive oil slick in the Gulf of Mexico.

After I typed it in on the internet, I got many hits, and it seems the most common theme regarding the headline is that Obama's recent support of drilling essentially amounts to a bribe. Those are some pretty serious accusations and I have a problem with them, mainly because there is another narrative circulating amongst the right, and that is Obama allowed the disaster to get worse so he can politicize it and use it to push an alternative energy agenda. The two theories seem to contradict one another, and there were a couple articles on Media Matters that seemed to detail the right-wing propaganda very well.

Regarding the BP contributions, Eric Boehlert wrote the following:

One thing that Boehlert forgot to mention was that Obama's campaign did not accept corporate contributions.  Dan Eggan of the Washington Post indicated that the $77,000 in contributions were from BP employees.

Boehlert also points out that during presidential elections, donations get ramped up. It is only fair, since we are discussing the 2008 election, that we mention John McCain, who has benefited from oil companies as well. 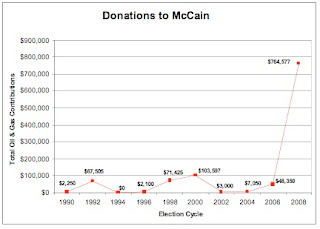 Since 1989, McCain had raised over $3 million from oil and gas companies, and members of his staff, such as Steven R. Phillips, a bundler who helped raise some cash for McCain's campaign, was also a lobbyist who had been paid over $3 million to push major oil and gas interests, for companies including BP.

It is easy to post an irresponsible headline that insinuates Obama is acting in the best interests for BP, but when you look at the complete picture, it is easy to find more cause. One could make the argument that the GOP have been dragging their feet on energy legislation in order to get more favorable positions on big oil, and as evidence, one could point to donations made like the ones McCain had received.

The other Media Matters article is by Matt McLaughlin, and discusses a May 3rd appearance on Fox News' Your World, in which former FEMA director Michael Brown made statements implying the Obama administration was purposefully allowing the oil disaster to get worse before stepping in, in order to push a clean energy agenda.

This claim seems to contradict what the other conspiracy is trying to state. Erica Lovely's Politico article stated the following:


While the BP oil geyser pumps millions of gallons of petroleum into the Gulf of Mexico, President Barack Obama and members of Congress may have to answer for the millions in campaign contributions they’ve taken from the oil and gas giant over the years.

Cassy Fiano wrote for Hot Air's The Green Room that the contributions were the reason behind the administrations slow response to the disaster.  "A lot of people have wondered why its taken Obama so long to respond to the oil spill disaster in the Gulf."  she wrote, "Well, now we know."  Fiano linked to an article on another site, Common Dreams, which implies BP's contributions are the reason why the Obama administratio offered cleanup support.  Cassandra LaRussa wrote the following:

In response, the Obama administration promised support in both clean up and containment of the environmental crisis. The president also sent clear signals indicating a potential federal investigation to determine cause and responsibility for the accident.

If BP faces heavy federal scrutiny, it's well-positioned to fight back: The London-based company has consistently spent top dollar to influence legislative and regulatory activity in Washington, D.C., the Center for Responsive Politics finds.

During the 2008 election cycle, individuals and political action committees associated with BP -- a Center for Responsive Politics' "heavy hitter" -- contributed half a million dollars to federal candidates. About 40 percent of these donations went to Democrats. The top recipient of BP-related donations during the 2008 cycle was President Barack Obama himself, who collected $71,000.

Stephan Tawney for The American Pundit also hopped on board the conspiracy band wagon:


Barack Obama receives more donations from British Petroleum than any other politician in decades. Suddenly last year the same oil giant receives an environmental analysis exemption from…the Obama Administration. One heck of a coincidence we’ve got on our hands, huh?

Tawney had used as evidence a Washington Post article by Juliet Eilperin (even though he incorrectly links to an article by Paul Farhi instead) to support his claim.  The Eilperin article indicates that the oil rig was exempt from a government analysis.


The Interior Department exempted BP's calamitous Gulf of Mexico drilling operation from a detailed environmental impact analysis last year, according to government documents, after three reviews of the area concluded that a massive oil spill was unlikely.

The decision by the department's Minerals Management Service (MMS) to give BP's lease at Deepwater Horizon a "categorical exclusion" from the National Environmental Policy Act (NEPA) on April 6, 2009 -- and BP's lobbying efforts just 11 days before the explosion to expand those exemptions -- show that neither federal regulators nor the company anticipated an accident of the scale of the one unfolding in the gulf.

According to Tawney, the donations by BP employees to the President's campaign were like a "get out of jail free" card.  I would like to point out this excellent by Robert F. Kennedy Jr. for The Huffington Post, that points out that many in the Minerals Management Services were Bush holdovers and the agency was "compromised," and that the disaster itself stemmed from a determination made by the MMS back in 2003, supporting the removal of a requirement for acostic switches, a device which may have prevented the explosion from worsening.

Based on all of this, I am really not quite sure what point the conservatives are trying to make.

Are they implying Obama's campaign contributions affected the administration's actions, and that the MMS was corrupted by BP, exempting the rig from an environmental analysis?

Are they implying that Obama didn't act promptly in an attempt to politicize the disaster and promote alternative energy sources?

The right-wing propaganda machines need someone to cross reference their narratives, because right now I am totally confused.  If Obama was influenced by big oil, then why is he working with members of congress to raise liability for corporations like BP?

If Obama was slow to act in order to push green fuels, then why is he still supporting oil drilling, and what about the White House Blog's detailed outline of the administration's actions.  According to Heidi Avery's account, the administration was a real Johnny-on-the-spot.

If you ask me, the right-wing are the ones trying to politicize this event, since this recent disaster seems to bring up memories of the previous Republican administration's failed handling of Hurricane Katrina's effect on the Gulf Coast.  It also touches up on a subject they seem to be the champions of - oil.  Conceding that the administration is doing everything in their powers would be admitting defeat, and for the conservatives, whose ultimate goal is to take back congress in the fall, the only way to victory is to paint Democrats as failures, and with these two conspiracies floating around, you can add domestic terrorists and corrupt officials as well.
Posted by Kevin at 11:11 AM