Did Bristol Palin's Testimony For Her Mom's E-Mail Hacker Case Reveal She Was Trig's Mother?

I don't like posting conspiritorial crap, but I found this article from the blog Palingates interesting enough to share.

The article, authored by Patrick, focuses on Sarah Palin, Bristol Palin, and the rumor that Trig was the younger Palin's child.  Patrick begins with an interesting twist to the story - an excerpt from a report regarding the sentencing of David Kernel.  Here is a screen shot of the article Patrick cites, a Fox News article from April 30th, obtained from a PDF copy supplied by Palingates: 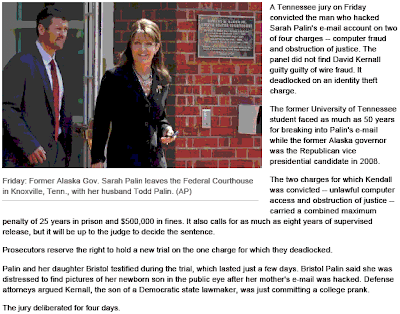 Patrick points out the second to last paragraph, where the Fox News articles states that Bristol was "distressed to find pictures of her newborn son in the public eye after her mother's e-mail was hacked."

Patrick goes on to write the following:


When Sarah Palin's yahoo account was illegally accessed by David Kernell on September 15, 2008, the only baby that had been born recently was - Trig.

So, if Tripp was not born at the time the pictures from the e-mails were released, then what "newborn" was the younger Palin upset about?  Palingates also supplied the images from the e-mail, and both pictures depicted Bristol with Trig.

Considering all the conservative "birthers" out there, I will do my best to keep this conspiracy alive until the Oracle of Wasilla releases her medical records, as she said she was going to do prior to the election in 2008 but never did.  I would also like a blood test confirming who the mother of Trig is, because seeing how corrupt the Palin administration was, I wouldn't put it past Todd and Sarah to pressure some physician to falsify some information to protect their little secret.

I suggest everyone look at the information collected over at Palingates.  The website can be a bit difficult to navigate because of the numerous articles and attachments regarding the former half-term governor of Alaska, but is highly worth it. The blog administrators do a superb job in backing up their arguments and their work has done plenty to make me think twice about things like Palin's "babygate."
Posted by Kevin at 8:02 PM