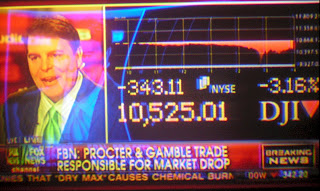 I had Fox News on just now when I heard the anchor announce breaking news, interrupting the normal programing with reporters from Fox Business Network.  I didn't catch his name, but he was co-hosting with Gerri Willis.

The anchor claimed that riots in Greece, due to the economic instability of the country, were to blame. Shortly after the claim, the reporter corrected himself, attributing the sharp drop of almost 1000 points to a bad trade for Proctor & Gamble. The folks at Fox were not quick to throw out their Greek comments, but I found it interesting that they jumped to attack Greece.

The picture above is from my television (pardon the blue shadow).  The image on my television was taken after they had corrected themselves, attributing the drop to a bad P&G trade.

Following the breaking news, Neil Cavuto picked up the conversation, having Jim DeMint on his show, in which DeMint continued on the Greek tangent, claiming American taxpayers were going to bailout Greece...

Cavuto continued to question the validity of the claim that human error caused the drop, seemingly trying to keep the Greek tragedy alive.  The guests pretty much stated that the system is sound, and all it took, in this particular instance,was a "fat finger" on the right stock to make the markets tumble.

Fox's website didn't quite hop on the P&G talking point though, and continued to attribute the decline to Greek economic drama: 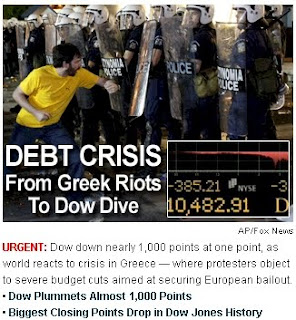 On top of all that, conservative talking point king Rush Limbaugh chimed in, declaring the Dow drop a result of the Greek riots (as well as future yet-to-be-announced German, Austrian, and Spanish riots), labeling the drop "Obama's Market." Where was Limbaugh when the Dow rose above 11,000?

Another interesting comment Limbaugh made on his program was that America would eventually bailout Greece. Sound familiar?

I bet tomorrow, the crazies are going to insist a socialist rogue trader orchestrated the whole thing...
Posted by Kevin at 4:21 PM