On May 4th, I had written an article discussing the upcoming meeting of the Sand Lake Hills Homeowners Association, Inc., and in the article, I had pointed out an interesting discovery - the use of software licensed by Lockheed Martin, the second largest defense contractor in the world, to deny local parcel owners the right to attend the general membership meeting of a local not-for-profit corporation.

The software in question, EZSurvey, was used to create an online proxy vote form in which members of the corporation could grant the board of directors, and only the board of directors, authority over the member's vote, as well as establishing quorum to allow the association to conduct business. The problem is that Sand Lake Hills used the proxy forms to indicate that they planned to restrict access to the meeting, as well use the forms as a type of permission slip to attend the membership meeting, contrary to Florida law.

To find out more, I had sent the following letter on May 14th to Warren Wright, the media contact for the Simulation and Training business unit responsible for the software in question:


While doing research for a particular story for an online current events website, it has come to my attention that software, under the license of Lockheed Martin, was used to create an online proxy vote form for a corporation in Orlando, Florida, by a Lockheed Martin employee by the name of William Flegal, from the Simulation, Training, and Support business unit.

What is alarming about this discovery is that the proxy form aims to deny parcel owners the right to attend a general membership meeting – a right that is protected by Florida statutes.

According to the proxy form, the general membership meeting for the corporation is to “be strictly limited to the Board, Board invited guests or speakers, and members in good standing,” not for “other guests or visitors.” The proxy also indicates that the form itself would be used as identification for a “check-in process.”

This is contrary to Florida statute 720.306 section (6), which states that “members and parcel owners have the right to attend all membership meetings.”

This corporation is currently engaged in a protracted legal battle (see sandlakehillslawsuit.com), regarding the infringement of property rights and the imposition of assessments regardless of membership status, among other things. Lockheed Martin’s software has been used to deny hundreds of parcel owners the right to attend these general membership meetings for the past couple years, as well as to establish quorum, allowing the corporation to conduct business, further infringing on non-member parcel owners’ rights.

The main issue at hand is whether Lockheed Martin has been complicit with this corporation in the violation of Florida statutes, or if this is the action taken by an employee who is using the software license for personal gain (William Flegal is a board member of the non-profit in question).

A secondary issue is whether or not Lockheed Martin plans to take responsibility for the misuse of it’s software license, placing it in the middle of a legal matter between hundreds of parcel owners and the corporation.

I would greatly appreciate a response, indicating Lockheed Martin’s course of action regarding this serious matter, so I may finish my work. If I do not receive a response, I will be forwarding this information to other members of the media for corroboration.

Included in this message are PDFs of both the online proxy form and the form’s page source, as well as the 2010 annual report for the corporation, showing William Flegal's involvement.

After waiting almost a week, I had sent a followup on May 21st:


I had sent you a message on May 14th, inquiring into the usage of Lockheed software by another corporation, using the software to deny parcel owners their legal right to attend general membership meetings, as well as conduct business that would infringe on the property rights of hundreds of homeowners in the Orlando neighborhood.

I have yet to see a response from Lockheed in regards to this matter and as of this morning, the online proxy form can be found online (http://www.sandlakehills.com/cgi-bin/ezs.exe?DATABASE=2010mayproxy&_ACTION=START - just press next to see the complete form).

The general membership meeting for this corporation is tomorrow.

I would like to know the actions, if any, Lockheed is prepared to make in regards to this matter.

Shortly after my second message, I received the following response:


I received your email and we are looking into the circumstances surrounding your allegations. Lockheed Martin will respond to you once we have completed our review.

I quickly checked to see if the proxy forms were still online, but to my surprise, the program was removed from the corporation's servers. 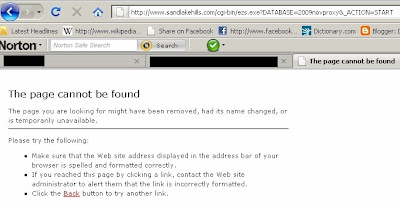 I checked back today to see if the corporation's website had changed to reflect the removal of the software and the proxies, this time I was not as surprised - the button located on the upper right had changed to display only a phone number:

While the change in the website is a positive change, and the presumed action taken by Lockheed Martin is a welcome one, there is one major lingering problem - the elimination of the future use of the defense contractor's software does not erase the past wrongs committed by the board of Sand Lake Hills. The proxies collected by the board of directors had been used to conduct business that infringed on the legal rights of hundreds of parcel owners in the neighborhood.

According to the corporate by-laws of Sand Lake Hills, "Owners may be obligated to pay Assessments to the Association" or face legal action, and according to the Amended and Restated Covenants and Restrictions the Board claims to be valid, "said assessment can be increased or decreased from time to time pursuant to the terms of the Association’s Bylaws." The association essentially grants membership preference over non-members, but here is where the law comes into place - it is illegal to deny parcel owners access to a general membership meeting, as well as the right to speak. Florida statutes are also specific as to who is liable to pay assessments to the corporation - the membership (statutes 617.0604 and 720.308) .

Ignorance of the law is not an excuse.

What is interesting is that these proxy forms not only violated Florida law, they had also violated Lockheed Martin's Code of Ethics and Business Conduct. 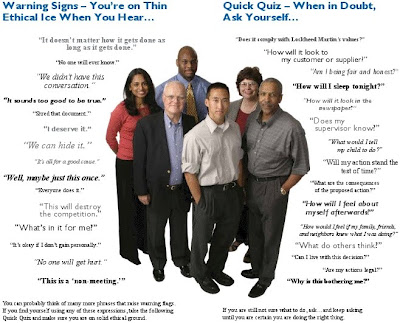 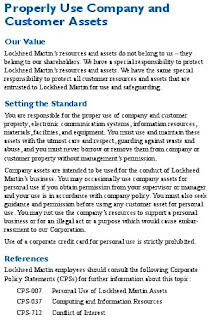 According to their code, misuse of company assets, especially for use in a personal business, is strictly prohibited, yet for the past few years, William Flegal and Sand Lake Hills had been using Lockheed's assets as if they were their own, which until now has not come to the attention of Lockheed, but can be very embarrasing for the defense contractor.


Lockheed's actions now cannot reverse the damage already done by employees of their corporation.  Just consider the lawsuit against Sandlake Hills that had cost one particular homeowner over $150,000 in legal fees, or the fact that their most recent proxy forms would not even permit some members-in-good-standing to attend their meeting, effectively dilluting their voting rights within the corporation.  Essentially, every action taken by the board of directors in the past few years has been perpetrated using these proxy forms.

Is Lockheed Martin responsible for the legal issues their software had caused?


Are the votes cast using the acquired proxies now null and void?


These questions require answers, but who will supply them?

Who will take responsibility for the actions of the Sand Lake Hills' board member and Lockheed employee?
Posted by Kevin at 6:54 PM