In a recent article by conservative activist John Smithson over at the Midknight Review, titled "Capitalism versus Socialism - public opinion from PEW Research," Smithson lays out a graph and writes about the positive or negative reaction to certain terms. What Smithson doesn't write about is that he ripped the text from The Pew Research Center for the People & the Press, word for word.

The way Smithson positions his article, it would appear as if he was just referencing the Pew article, but there are absolutely zero links to the Center's article, nor credit given to those who contributed the research.

This is not the first time Smithson has plagiarized material. After Smithson accused this site of copying his name and subject matter, the authors of The Midnight Review researched the Midknight Review, pouring over hundreds of Smithson's articles, revealing that he improperly cites numerous articles, and in many cases, omits the true author's name. This is just the most recent incident in which the conservative activist has claimed information as his own.

Check it out for yourself (Midknight Review's copy is on the left): 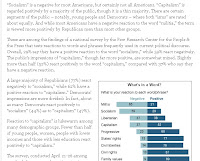 Shame on John Smithson for plagiarizing articles.  It was our hope that Smithson would properly cite articles after we pointed out his last transgressions, and Smithson claimed that he usually cites other's works, although he believed some of his copying didn't equate to plagiarism and supposedly saught the approval of one particular author he copied as proof he was right.

Anyway, since Smithson didn't give the contributors of the Center's research credit, we here at the honorable Midnight Review will do so for Smithson, and he could just thank us later:

Being the good little conservative activist Smithson is, he conveniently left out other findings in the research, focusing solely on the view of the words "socialism" and "capitalism."  Had Smithson decided to plagairize the remainder of the article, he would have also revealed that a majority of Republicans have a positive opinion regarding "progressives" and "civil rights," despite attacks by the far right against such concepts as being a form of "social justice" and another form of communism.
Posted by Kevin at 12:30 AM