Palin said that America needs to "go back to what our founders and our founding documents meant -- they're quite clear -- that we would create law based on the God of the bible and the ten commandments."

Palin had recently spoke out against the separation of church and state in her April 20th speech at a Women of Joy conference.

"Lest anyone try to convince you that God should be separated from the state, our founding fathers, they were believers," said Palin. "And George Washington, he saw faith in God as basic to life."

"In Washington's farewell address, he wrote 'Of all the dispositions and habits that lead to political prosperity, religion, faith, morality are indispensable supports,'" she continued. "So Women of Joy, remember that, and remember that even today this nation needs you."

In these statements made by Sarah Palin exists many contradictions. Let me start with her comments made to O'Reilly, regarding the basis of American law.

Palin wants America to transform into a Christian nation, and believes that America should base it's laws off the Ten Commandments. For those who don't know, here are the Commandments (copied from a neat graph on Wikipedia): 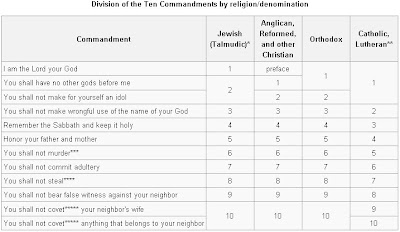 I wonder what Palin's interpretation would be regarding some of the Commandments, like the one requiring followers to believe in no other God then the Judeo-Christian god.  I guess Palin would have all Hindus jailed.

How about the the one regarding adultery or keeping the Sabbath holy?  I guess Palin would dwant the government to come in and enforce fidelity and going to church.

It seems the only real laws based on the Ten Commandments (using the Talmudic divisions) are numbers 6, 7, 8, 9, and 10, so really, Palin is calling for the American legal system to be based off of the Five Commandments.

Now if you wanted to take the bible literally, then you may have a real problem with basing our legal system off of the bible.  Consider Deuteronomy 5:12-15:

12. 'Take care to keep holy the sabbath day as the LORD, your God, commanded you.

13. Six days you may labor and do all your work;

14. but the seventh day is the sabbath of the LORD, your God. No work may be done then, whether by you, or your son or daughter, or your male or female slave, or your ox or ass or any of your beasts, or the alien who lives with you. Your male and female slave should rest as you do.

The passage references slaves.  Does this mean the practice of slavery is good?  I guarantee Palin would disagree with that assessment, but that is what the bible says.  To exlude the idea of slavery would be selective - choosing only certain passages of the bible to support one's cause.

Now lets looks at the comments made by Palin at the Women of Joy conference, and in particular, her quoting George Washington, which is excellent, because I have been intending to write about his Farewell Address for some time now.

Palin claims that the founding fathers intended on this nation to be a Christian one, and she uses Washington's farewell address to back up her claim.  It is true that Washington wrote that religion was essential to "human happiness," asking the following:  "Where is the security for property, for reputation, for life, if the sense of religious obligation desert the oaths which are the instruments of investigation in courts of justice."

Palin is for limited government.  It's a common talking point of hers.  "Only a limited government can provide the best path" Palin said at the Lane County Republican’s Lincoln Dinner last month.  Palin's philosophy is in line with the conservative base, known as the Tea Party - what conservative radio host Matt Walsh calls "the Sarah Palin movement."

The conservatives are critical of bloated government, and have proposed various cuts to help reduce taxes, such as the elimination of various federal bureaucracies. One popular target is the Department of Education.

Tea Parties around America have called for the elimination of the department.

Former presidential candidate Mitt Romney was for the elimination of the department.

The state GOP platforms, such as Maine or Texas, have called for the elimination of the department.

Even Palin's former running mate was for the elimination of the department.

So why am I pointing out all these different people and organizations?

Palin has been a  Republican since 1982 and is admired by the Tea Party movement.  She ran as the 2008 vice-presidential candidate for the Republicans with Sen. John McCain, and had said at a Tea Party rally that she would give "serious" consideration to a Romney/Palin ticket in 2012.

This is the same woman who quoted Washington's Farewell Address - the same Farewell Address that called for government to help in "the diffusion of knowledge," because after all, an informed and knowledgeable people can make the best choices.

"Promote then, as an object of primary importance, institutions for the general diffusion of knowledge. In proportion as the structure of a government gives force to public opinion, it is essential that public opinion should be enlightened" said Washington.

Conservatives like to latch on the word "promote," arguing that it is different from "provide," but then by that logic, you could argue that Washington only promoted the use of religion and was opposed to the notion of a Christian nation.  Washington's emphasis on personal responsibility - one's personal responsibility to utilize religion - would seem to fall in line with conservative thought, but it seems the right-wing has no faith in their own doctrine, and so they wish to impose their beliefs on those unwilling to accept the Judeo-Christian tradition.

Palin had decided to use a portion of his address to support her argument, as if it were definitive proof that America should be a Christian nation, but when you consider the Farewell Address as a whole, you will notice that the GOP platform contradicts the founding father's address.  Why is it okay to use his address to support one plank while not another, unless the only way to support Palin's claims is to pick and choose throughout history until a fluent narrative is created.

If Palin was a true follower of the founding fathers, and in particular, Washington, then she would also have considered his warning against political parties, but then again, it is in Palin's nature to be partisan.  "I have already intimated to you the danger of parties in the State," said Washington.  Now contrast this to Palin's targeting of Democrats whom she wants to remove from office.  Hypocrite?

The fact is Palin has cherry-picked everything to fit her ideology. When put into context, one can see that the conservative argument is flawed.  The Ten Commandments are a good start, but Palin the historian, seems to forget the fact that the American legal system is based on English law, which can trace it's origins to Roman law, which predates the adoption of Christianity by the Roman empire. You can't simply pinpoint the idea of this nation's religious and legal identity solely on one matter, which is what Palin has done.
Posted by Kevin at 10:49 PM