On my most recent visit to conservative activist John Smithson's The Midknight Review, I made an observation.

In a recent article, Smithson goes on to write about the conservative movement and the "cornerstone principles" that unite all the different "nuances" of conservative thought.  Smithson defines the following as principles "true" conservatives believe in:

Notice something missing?  Don't worry.  Smithson has decided to explain:


Notice that this editor left off "pro-life" and he is a strong pro-lifer. How is that seeming conflict resolved? States rights. If the "pro-choice" candidate strongly supports regional disagreement, then we can get along. Nationalizing "pro-choice" is a no no for this writer. Ditto for gun laws and education.

Let's take a look at what Smithson wrote about me last month:

On April 14th, Smithson made the baseless claim that I support the "murder of the unborn."  Smithson's newest article makes it clear that it is Smithson who supports the murder of the unborn, just as long as they aren't in his district.  I had stated this before and I will say it again - Smithson allows his politics to trump his faith.

Smithson questioned my faith, but now the tables will turn.

Smithson claims to be a minister in the Stone/Campbell Restoration tradition, with years and years of experience, but if you notice in his bio, he lists something ahead of his religious training.  He lists his occupation as an "avid conservative political activist" before mention of anything else. 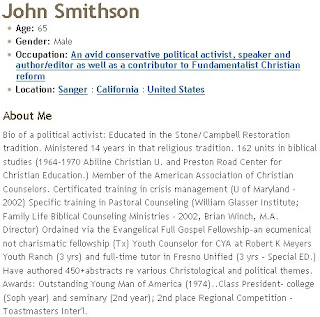 What about his faith?  Why is it that his pro-life stance takes a backseat to his political ideology?

Here is an excerpt from The Encyclopedia of the Stone-Campbell Movement: 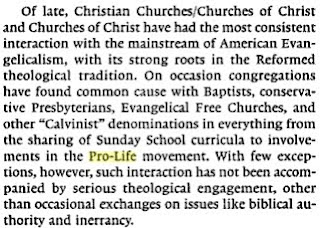 It appears that Smithson supports the murdering of the unborn while pretending to be a {practicing] Stone/Campbell Restoration fundamentalist.