Conservative media is all about reporting on elections that show a referendum against the administration, such as New York's District 23 race last year, but where is the enthusiastic reporting, or any reporting for that matter, for the Pennsylvania race that pitted former John Murtha aide Mark Critz against Tea Party/GOP candidate Tim Burns, ending with Critz the victor?

David Weigel of The Washington Post wrote the following:


In the end, Republican Tim Burns didn't come that close to winning the race in Pennsylvania's 12th District. Democrat Mark Critz took the seat with 53.4 percent of the vote to 44.3 percent for Burns, a margin of 12,208 votes, with the remainder of the vote going to a Libertarian Party candidate.

Coming after polls showed Burns running as high as 49 percent -- in the one district that voted for Kerry in 2004 and McCain in 2008 -- it was a shock and a disappointment to tea party activists. Robert Stacy McCain, a freelancer who made four trips into the district to shadow Burns, reported that Burns allies like Diana Irey, who ran against the late John Murtha in 2006, were even interpreting early results that showed Critz narrowly winning some Democratic precincts as proof that Burns would win.

Make no mistake -- conservatives were almost as plugged into this race as they had been in NY-23. The National Action Network, Americans for Prosperity and the National Republican Trust all got involved in the race with on-the-ground aid or advertising. Andrew Breitbart's Big Government and the Election Journal blog -- the site that gave us the infamous video of New Black Panthers lurking outside a 2008 Philadelphia polling place -- both had contributors in the crowd, looking for fraud, and the story of double-counted votes in one county briefly burned up the conservative media. Fox News endlessly promoted Burns, Sarah Palin endorsed him, and Newt Gingrich and Scott Brown stumped for him.

Weigel cites Tim Phillips of Americans for Prosperity, who tried to put a positive spin on the loss:


Critz dramatically under-performed in a core Democrat district held for 36 years by John Murtha, where Democrats outnumber Republicans by 2 to 1 in voter registration. Even with a hotly contested Senate primary driving left-wing Democratic turnout, Critz ran away from the Obama/Pelosi agenda.

The Obama/Pelosi agenda is deeply unpopular with the American people. Big-government candidates in dozens of congressional districts across the country will not have the advantage Critz had of an overwhelmingly Democratic district. Many of them have themselves cast votes for ObamaCare and cap-and-trade that will prevent them from portraying themselves as opponents of the measures, as Critz did.

This kind of argument doesn't make sense to me.  If the majority of the population are upset with the "Obama/Pelosi agenda," then why would they vote for a Democrat and not the Tea Party candidate?  Granted, with Democrats outnumbering Republicans 2 to 1, Burns had a decent performance at the polls, but it wasn't enough to win, and definitely proves that the majority is not represented by the Tea Party or GOP. 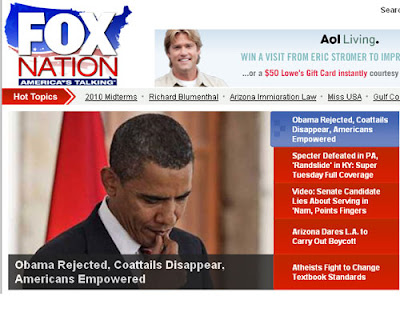 Many political handicappers viewed the race as a bellwether for the mood of the electorate and a preview of how the midterm elections could go this fall.

If Republicans are to win control of the House in November, they need to secure the southwestern Pennsylvania seat once held by Murtha, who died unexpectedly in February.

They get one more shot.

It isn't all bells and whistles coming from the right, but they sure did view the NY-23 race as a "bellwether," but I guess things have changed since then, especially since the winner this time didn't have the letter "R" following his name.  What makes this more ridiculous is that Fox Nation posted the above image showing yesterday's elections as a rejection of the administration.  Really?
Posted by Kevin at 11:20 AM