John Smithson had pushed back to my recent accusations of plagiarism. On May 14th, I pointed out an article Smithson posted on his blog, Midknight Review, pointing out the similarities between his article and the one written by George Will for RealClearPolitics, and in particular, the top portion of Smithson's article that stated the red text was "Midknight Review's."  Below are a side by side comparison (you can click on the image to enlarge). 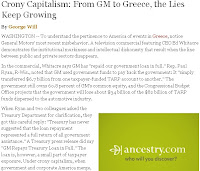 It seems that Smithson didn't really like my accusations, and had just responded to my observation.  This is what he wrote: He challenged me to post his comment on my main page to see what my readership thought of his plagairism.  I of course responded to Smithson with the following:


Here we go again with the baseless claims and name-calling!

First, I am not from the South, I am from New York.

Secondly, you did not link to the actual article. You link to George Wills RealClearPolitics author profile, and the hyperlinks in the article don't link back to original article, rather, they link to various other supporting articles that Will apparently linked to.

I'm not asking you to use MLA or APA formatting when citing a source, but your formatting is highly inconsistent, and especially how you phrased this particular article, it would lead one to believe you were taking ownership of the Will article.

I go on to reference Smithson's inconsistencies with citations and his commentary, pointing out a May 15th article titled "Your church could lose its tax exempt status on Monday unless . . . . ."  For posterity, here is a screenshot of Smithson's article: 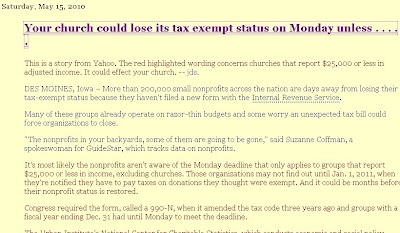 In it, Smithson specifically differentiates between the black text and the highlights, pointing out what the highlights actually meant, which contradicts what Smithson left in his response to my previous article, in which he stated that that only the "highlights" were his, not the text.  Why would he go as far as to explain the emphasis placed in one article but not the other?

As a side note, I wanted to make an observation on this particular article.  In Smithson's comment above the Yahoo article (that is not linked to at all), he states that "the red highlighted wording concerned churches that report $25,000 or less in adjusted income," yet in the body of the article that Smithson highlighted, the Yahoo story points out that the the Monday deadline "only applies to groups that report $25,000 or less in income, excluding churches."

How about this article from May 17th that goes on without a mention of where the article came from until the end, where Smithson makes reference to the source, directing people to go read the "remainder of this sad sad story" without clearly stating that he wasn't the author.  Also take notice that Smithson's own words are in red highlights (I just noticed that my screenshot caught my mouse accidentally highlighting some of the first sentence). 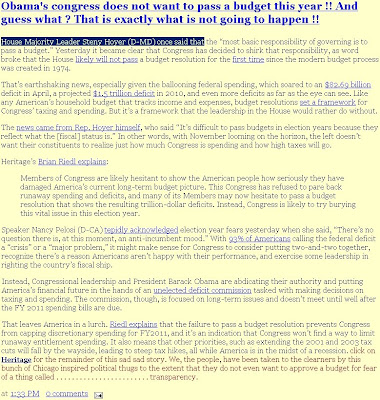 There was also this other instance of plagiarism that we reported on, where Smithson copied from a Pew
Research Center Poll with no citations or references to the original authors who actually conducted the research.

Many of Smithson's articles are formatted poorly and inconsistently.  He makes citations and quotes authors, but rarely does he provide hyperlinks to his sources.  He insists highlighted portions are only added for emphasis, but in other articles, he uses highlights with no explanation.  He also interjects statements into the body of a cited work, further confusing the reader. 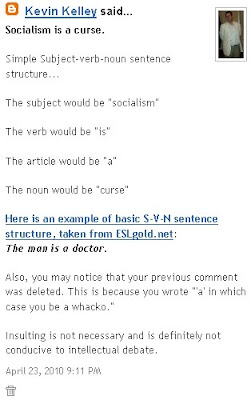 In Smithson's response to my initial article, he implied that I did not know how to read, but apparently, that statement applies to Smithson himself.  I am reminded of when he argued that he never defined socialism as a "curse," despite specifically referring to "the notion of Marxism or Socialism being 'a curse" in previous comments left on this site.  Smithson claimed he used socialism as an adjective, not a noun.  I had to school Smithson on elementary grammar.

Smithson implied in his comment that I did not know how to read.  Based on his past comments left on this site and his continued plagiarism and improper citation of others' works, one could come to the conclusion that Smithson is the one in desperate need of reading lessons, and yes, claiming ignorance or assuming the reader will know a work is not copied is no excuse.

If Smithson returns to read this post, maybe he'll answer for his hypocrisy regarding abortion, where he had come out in support of the "murder of the unborn," while making false accusations regarding the matter against myself, as I had pointed out previously in this article.
Posted by Kevin at 8:50 PM