Here is a perfect advertisement illustrating the divisions on the right.  Here is a conservative candidate, Meg Whitman, the former CEO of eBay, running as the Republican gubernatorial candidate for California.  Conservative figureheads like Dick Cheney and Newt Gingrich have endorsed her candidacy.


This ad is just nonsense.  This ad was made by Tea Party candidate Steve Poizner, who is also vying for the GOP spot on the ticket, is using this ad to manipulate the conservative base, which according to a Gallup poll, almost half of Republicans are religious, and obviously pornography would be a rallying cry for them to vote for Poizner.

Duane Campbell of Choosing Democracy had written that "The Tea Party Activists and their Republican funders promote  conflicts over  issues," and that people have to work hard at trying to figure out when they are being manipulated.


While we  separate ourselves from those who would respond to the distrust, discontent, and anger with domestic terrorism- such as  the militia movements- the anger itself is legitimate.  However, when  the anger is only focused on the government, and not also on Wall Street and corporate America, then clearly the group is being manipulated.

Obviously Poizner's ad was intended to manipulate - why else reference Goldman Sachs at the end of a pornography attack?  Poizner wasn't attacking Wall Street with his mention - he was trying to paint Whitman as untrustworthy.

Joe Garofoli of the San Fransisco Chronicle questioned the mention of Goldman Sachs too, wondering if he is trying to beat a dead horse or play catch up.

"Is Steve Poizner seriously trying to tell us that eBay is a pornography site? eBay's millions of users, including my grandmother, will find that a little hard to believe. Steve Poizner is desperate," said Team Whitman's Dan Comstock. "The only pornography in this race is the obscene act of watching a liberal like Steve Poizner try to pretend he's a conservative."

What is interesting is that Whitman claims Poizner is a "liberal" trying to "pretend he's conservative," but considering he has the support of the Tea Party and she has the GOP old guard, I think this is another election that is demonstrating the divisions of the right, indicating just what kind of role the Tea Party is playing in GOP affairs.  The Tea Party likes to claim they are independent, but that claim is laughable. 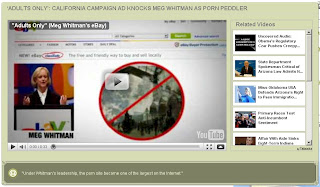