I'm sure everybody is familiar with Sarah Palin's new neighbor by now, after all, Sarah had publicly attacked the tenant, author Joe McGinnis, as being some sort of pervert who will peer into her daughter's bedroom and watch her children swim in Lake Lucille. McGinnis, an investigative reporter, is writing a book about the former half-term governor and celebrity entertainer Sarah Palin, and was approached by Palin's own neighbor to rent the house, according to McGinnis' son.


[I]f you were writing a biography of Tiger Woods and had the chance to move in with him, or his pool house, or rent next door or down the street from him -- it would be journalistic malpractice not to. As a writer, you go where the story is, get as close as you can to it. People who write about politics, campaigns, they travel with the candidates, stay in the same motels, ride the bus, eat breakfast, hang out any and everywhere they can to get access. It's pretty basic. We want to read the work of someone who is as close to their subject as possible. That's called reporting. And when it's for a book about someone, all the more important to be close....

He's not stalking or peeping or peering or meddling. He's simply fulfilling his obligations to his publisher and his readers and himself -- to get as close to the subject of his book as possible. You'll never see tabloid photos or depictions of backyard activities. He's a professional writer with great integrity and an amazing sense of fairness.

Palin, being a journalism major, should understand this, but she doesn't, resorting to juvenile attacks. Why would she insinuate that the author would peer into his little girl's bedroom? As Palingates had detailed, Sarah Palin has shown a history of sexualizing her daughters for publicity.

Remember what happened when David Letterman made a joke?

“One awkward moment for Sarah Palin at the Yankee game," Letterman said, "during the seventh inning, her daughter was knocked up by Alex Rodriguez.”

But an even more disturbing fact, which Letterman may not have known, was that the daughter who accompanied Palin on her trip to New York was 14-year-old Willow—not 18-year-old Bristol, the unwed mother of Palin's first grandchild. Now, many critics—including the Palins themselves—are slamming Letterman for jokes that they say make light of sexual abuse of an underage girl.

The Palin's came out swinging, attacking Letterman for making a joke about their daughter getting raped by a Yankee.

Palin's next step was to build a fence... a really tall fence to keep the peering eyes of McGinnis off her property. I was wondering how the Palins were able to quickly build?

According to the City of Wasilla, there is no requirement to obtain a building permit but the city does have landscaping standards, which details the use of fences. 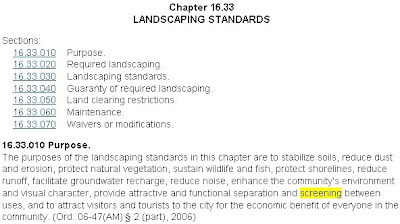 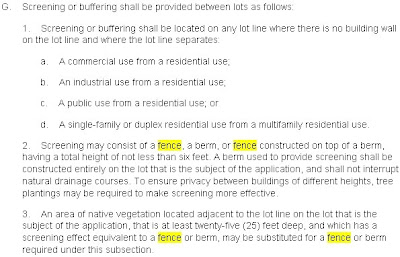 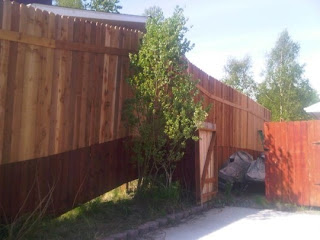 Essentially, the law permits the construction of a fence, a berm, or a fence on a berm.  Wasilla's municipal codes specifically state that "to ensure privacy between buildings of different heights, tree plantings may be required to make their fence more effective."  The Palin's did not do that.  They simply built an extra large fence.  Pictures of the structure appear that the Palin's just built a taller fence on their existing one.  The code doesn't state anything about building a fence on a fence.

Their fence also seems to violate the purpose of the code.  While the purpose explains that the code was designed "provide attractive and functional... screening between uses," and the Palin's fence is between two residential properties, it is an eyesore and is definitely not inviting to visitors or tourists, like McGinnis.

I am also curious if Sarah Palin's newest addition to her property will affect her property taxes, but don't expect the Palin's to go running to the accessor, after all, they didn't when they built a house-sized cabin on their property.  Records show that the former half-term governor hasn't paid any taxes on those dwellings, and her excuse - her lawyer Thomas Van Flein said it is not Palin's responsibility to report what is built on her property.

Dave Dunivan, the assessor for the Matanuska-Susitna Borough, begs to differ, stating that it is the required by state law for the owner to report any errors in their tax assessment, which Palin had not done.  Dunivan stated that homeowners are quick to point out errors that increase their taxes but frequently omit information if it benefits them.  The fact that Palin's tax assessment omitted the cabins was an error that required her to correct it.

While Palin's fence isn't anything like a cabin in the woods, it will surely impact the value of both her home as well as her neighbor's.  I wonder if she thought about that before she decided to start her feud with McGinnis.

The big question here is whether or not the Palin's fence is a violation of Wasilla code.  What do you think?
Posted by Kevin at 12:05 PM