The Spiral Of Silence And The Tea Party Minority

I was recently reading about the political science and mass communication theory propounded by the German political scientist Elisabeth Noelle-Neumann called "The Spiral Of Silence."

According to Wikipedia, here are the crucial points to the theory: 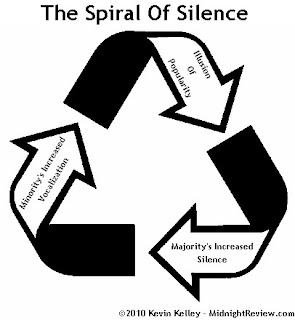 According to the theory, members of a society can sense when certain minority views gain in popularity.  The majority in turn becomes reluctant to express opinions critical of the minority-held view while the minority become emboldened and more vocal about their positions.  This cycle creates the illusion that the view of the minority is held by the majority of the populace, pushing the majority view further into the background of the imaginary popular position, creating an artificial majority.

The cycle breaks when general consensus is met, and a perfect example in politics that illustrates this fact would be the presidential campaigns of Ross Perot in the nineties, bringing the national debt to the political forefront.  The majority parties were quick to integrate this issue into their political platforms, ending the cycle.

This theory, when discussing the complete spiral, reminds me of the Tea Party movement and the constant promotion by conservatives claiming their views represent a majority of the nation, despite figures that reveal a minority of the population adhere to or support the Tea Party platform.

Looking back at the beginning of the Tea Parties, they were nothing more then disorganized protests located randomly across America, but with increased pressure from politically connected media outlets like Fox News, more positive coverage began to emerge, presenting the Tea Parties as a populist movement representing the will of the nation, not a political fringe dissatisfied with the establishment and then re-branded to appeal to more mainstream conservatives.

The "movement" was born last February during a rant by CNBC's Rick Santelli, attacking the administration's home loan modification programs, claiming that it was "time for another tea party."  Shortly after, anti-tax events were established by conservative organizations nationwide, going by a collective identifier - Tea Parties.  This is where we can start to see the spiral take shape.  Conservatives argued that their events lacked coverage, but that was proven false by Fairness and Accuracy in Reporting (FAIR):


A nice round-up from TVNewser of the evening newscasts. Will conservatives ever catch a break from the left-wing media?

How The Evening Newscasts Covered the Tea Parties

• NBC Nightly News led with two stories on tax day. Lee Cowan reported on the tea parties while Savannah Guthrie reported on the White House message of middle-class tax cuts. In his open, Brian Williams said the tea parties were "organized on the Internet and by some cable TV personalities."
• ABC's World News made it the third story. First a soundbite from President Obama and a Dan Harris story on the tea parties which were "cheered on by Fox News and talk radio," Harris explained. The Charles Gibson broadcast led with two stories on the pirate attacks--Jim Sciutto in Kenya with the crew of the Maersk Alabama and David Muir with a story on the attack of another U.S. ship.
• CBS Evening News led with tax day--a soundbite from President Obama, a live picture of a rally in Arlington, Texas and a tea party story from Dean Reynolds. Reynolds referenced "a fistful of rightward leaning websites and commentators...embraced the cause," while showing Neil Cavuto and Glenn Beck at two different rallies.

While there was coverage of the events by news organizations other then right-leaning corporations, conservatives continued to vocalize their opinions, claiming the liberal-biased news outlets were enforcing a blackout of the conservative protests.  The mainstream media fell into silence, accepting the right-wing narrative, and then increasing their coverage, avoiding criticism of the minority-led protests.

The perceived popularity of the Tea Parties pushed the majority into silence while emboldening the right, which helps explain the anger that erupted at last summer's town hall meetings.

Were the angry citizens at the town hall meetings representative of only a small minority of the population?

As the illusion that public support increased for the Tea Parties, the minority position grew beyond what initially stemmed from a dissatisfaction with taxes, adopting various other issues that conservatives backed, such as an opposition to health care reform.  The Tea Parties framed their cause as a moral one, claiming to be the defenders of American morality and spirituality - consider Glenn Beck's assertion that America is a Christian nation and that "social justice" is not indicative of the religious tenants this nation was supposedly founded upon.  The mass media involved themselves in the process every step of the way, pushing conservative propaganda for fear of upsetting the balance, further continuing the spiral of silence.

The last two crucial points are perhaps the most important.  While we could only hope that the effect of the Tea Parties are temporary, the fact of the matter is that they had already activated the spiral of silence, and it looks as if their assault on America's social cohesion is not going to end anytime soon.  Just consider the references to civil war made by popular Tea Party-revered pundits like Rush Limbaugh and Glenn Beck.

Hopefully the majority will break their silence and end this vicious cycle before it is too late...
Posted by Kevin at 7:00 PM